Over the past few months we have spent quite a bit of time in the Czech Republic and I have been swept away by its beauty. The cities are magnificent with breathtaking architecture and the countryside is lush and dotted with the sweetest villages. My romanticized view and attraction to this place is only deepened by the fact that this (or at least part of it) was once Bohemia. I guess I have always fancied myself as somewhat of a Bohemian and been drawn to attitudes and expression that embody this freeness (giggling gypsies, dissertation on Serbian Roma, long skirts and beads…). The European use of the term “bohemian” was first used to talk about the Romani people in France who had traveled through Bohemia to get there. Later it was used to refer to those who lived non-traditional lifestyles fueled by artistic expression in the Romani neighborhoods in France. In my imagination, the place Bohemia was colorful, beautiful, inspiring and dramatic. The Czech Republic is all that.

Karlovy Vary (or Carlsbad) is one of the most beautiful spa towns in the world (we actually went there a second time because we really wanted Chris to see it). The story goes that around 1350 Emperor Charles IV discovered the thermal springs found in the basins of the Ohře and Teplá Rivers. As these mineral springs were said to have curative properties, he decided to build a city so that he could take advantage of them. Over the years the city expanded and became a popular place to visit and heal. Its location in more or less the center of Europe attracted many famous people – Beethoven, Goethe, Liszt, Paganini, Schiller, Chopin and even Peter the Great. The city center and all the spa buildings are built on the banks of the river. The river is flanked by steep mountains and the city is built on the hillsides (walking around Karlovy Vary is great for the buttocks). The buildings are generally fairly narrow, but tall and are painted in pretty pastels. Along the one side of the river is an extended pedestrian zone with lovely cafes and boutiques. Of course, it is also littered with many tourist shops selling Karlovy Vary wafers (big round wafers with a creamy filling) and the porcelain mugs that people use to drink the waters. The mugs are really cool and have a built in straw on one end – like a fancy porcelain sippy cup (G and I got ones like a horse and a giraffe). One walks along this area and samples the various waters along the way. You are supposed to relax while doing this and take advantage of the many benches along the riverside. This was pretty much impossible due to the amount of tourists with selfie sticks, but we tried our best to embrace the experience. We made the ultimate faux pas at our first spring… I got all excited thinking we would be tasting lovely mineral waters (I guess I have been missing our well water at home) and emptied G’s Wonder Women drinking bottle and excitedly filled it up (annoying all the other tourists behind us as the bottle was fairly large). We then took our first sip and were a little surprised that it tasted warm and salty, with a hint of Sulphur (I was relieved when G swallowed). Had to quietly dispose of it in a gutter – you are not allowed to pour it on the greenery. Chris was a real sport when his turn came to taste the waters that G excitedly filled up for him (and I chuckled on the sidelines). The beautiful colonade buildings were mostly built at the end of the 19th century. They are elegant and airy and are great places for photos. Besides these buildings there are a number of old spa hotels (including the Grand Hotel Pup), churches and theaters. The Russian Orthodox church was my favorite with its blue and gold details and multiple turrets and icons. Poor little G’s legs really had a work out, but we had fun discovering winding stairs going up between buildings with what looked like secret doorways in the walls opening up onto terraces. One of the sweetest moments was when Chris took G on a carriage ride through the city. In every city we have been to, she has seen these carriages and asked to go in one. I have always said “not today,” so when daddy took her it was extra special. The whole experience was quite magical and awe inspiring. Almost every house looked like a castle to us!

Our hotel was very quaint and had the funniest old school lift. It was one of those double door ones where as soon as you push the button, it jerks into action. A good few giggles were had in this tiny space. The room on the fourth floor was very spacious, but if you opened the window on one side, you could look out at street level on the road behind the building (that’s how steep it was). My favorite part was the breakfast room -complete with double French doors, flowy white curtains blowing in the breeze, full silverware and white tablecloths in an old dining room. Just lovely and oh so civilized. As you can imagine, parking in Karlovy Vary is problematic and after a few tries parking in the city, we found a park house that was on the next hill about 15 minutes away. I had a bit of an embarrassing episode trying to leave the garage as I could not turn our large rental car tightly enough to leave and ended up having to ask the very funny attendant to help. He was hilarious – spoke to us in Russian and just hopped in the car and zipped around the corner at a velocity that made my heart stop for a second. Jordan was in the passenger seat and he jokingly said “good-bye” to me while still sitting in the car as he pulled out of the garage. 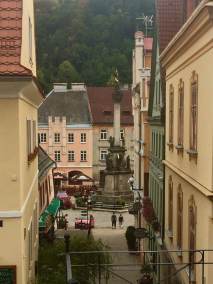 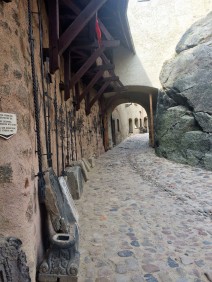 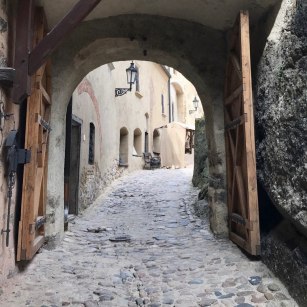 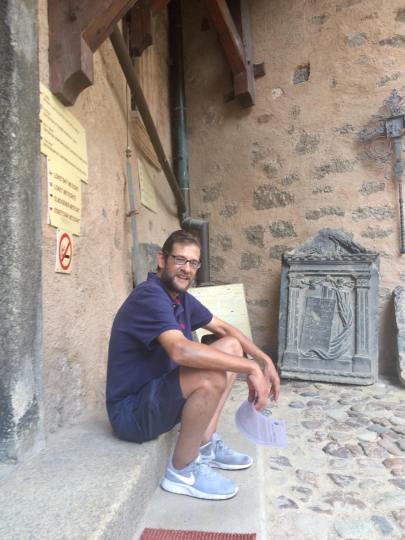 Just outside of Karlovy Vary is one of the most picturesque and “out-of-a-fairytale” towns called Loket. Jordan and Chris wanted to see a real castle and the Romanesque Loket Castle was perfect – small, but with everything needed to capture the imagination. You enter the town over the moat bridge and as with most castles in this area it is built on a large stone and looms above the town. One enters the castle through a big wooden gate into a courtyard (much like the Winterfell in Game of Thrones, but smaller). There are walkways around the upper floors and multiple staircases and doors – all centered around the courtyard, so it’s hard to get lost (and G could explore freely). The castle has a 26 metre high tower that houses the Loket Dragon in the basement and a rickety wooden staircase that winds around to a spectacular viewpoint at the top. On the way up there is a medieval loo (in case you feel the urge) and an old fireplace. Hidden in another staircase one can see the smallest known rotunda (apparently very typical for Romanesque architecture from this period). The castle has quite a muddled history and has had long periods of neglect. Built around 1250, it was once the favorite place of refuge for the House of Luxembourg, was then passed on to other aristocrats for a couple hundred years,  later became a prison (which might explain the very graphic and detailed display in the torture chambers) and is now a museum. The small town below is gorgeous and it feels like one is stepping back in time. 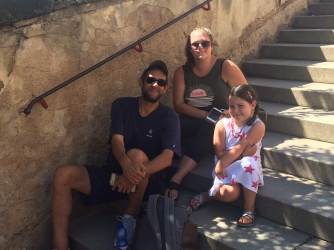 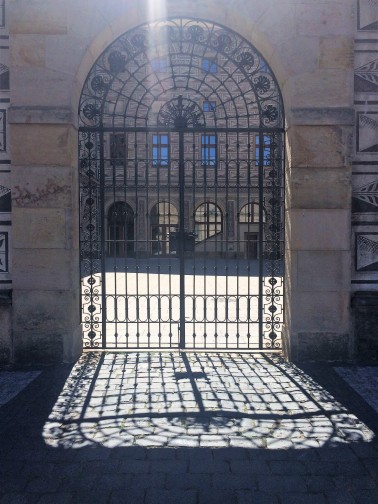 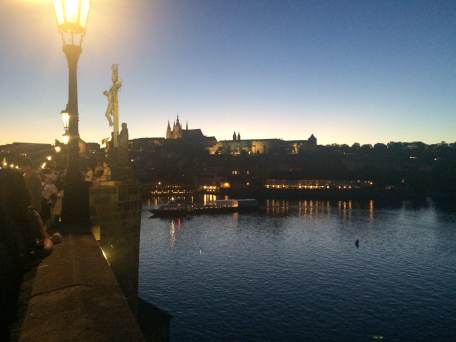 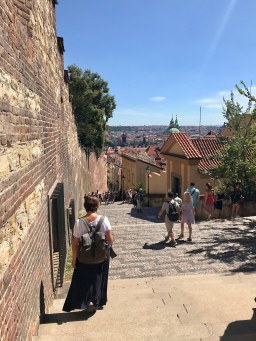 Of course, a trip to this country wouldn’t be complete without a visit to the magnificent city of Prague, the perfect tourist destination. It is beautiful, built along a river with architecture that is second to none. There are windy cobblestoned roads that are often not wide enough for cars (Chris very bravely did all the driving and I sat with my eyes closed) and buildings with turrets and intricate stucco. The buildings are painted in different colors and often have courtyards. I struggled to get my bearings in this city as there are so many little roads that bend – it almost feels like a maze. I absolutely loved the big old doors – they all seemed to hold many secrets and stories and I couldn’t stop thinking about Milan Kundera. The Prague castle is right near the center and one walks from the city across the famous Charles Bridge to get there. The Charles Bridge is lined with statues and is spectacular (especially at night – Chris discovered this on a late night walk). The castle is supposedly one of the largest European castles and is also the residence of the Czech president (thus the armed guards outside). It holds the Bohemian crown jewels and in addition to all the buildings attached to it, has notable gardens. We made the climb up to the castle (it was arduous) and enjoyed the view at the top. Our intention was to go in, but we got scared off by the very long line of people waiting to go into the castle. The square at the top was well worth the visit and from here one has a great view of all the rooftops of the city. So fascinating to see all the angles, little windows and random balconies. On our walk down we stopped at the Lennon Wall and enjoyed another wall of graffiti (different to Berlin). There is a wall outside the Sovereign Order of Malta where people have written John Lennon inspired lyrics since the 1980’s. At one point the wall became a thorn in the communist regime’s side as people began to air their grievances on the wall. The owners of the wall refused to restrict the graffiti and to this day people still share their words on it.

Jordan and I went on a little mission to find the astronomical clock one afternoon and stumbled upon the town square. It is hard to describe how beautiful and surreal this square looks. It almost feels like a façade or movie set. Prague is well known for its puppets, garnets, Bohemian crystal, and wooden carvings. Every second shop seemed to sell these, but finding a small boutique that sold handmade marionettes was impressive. So much attention to detail! The whole city is throbbing with tourists from all over the place, but I couldn’t help but notice a strong Russian, Chinese and Vietnamese presence. This was the first place I have been where one could hear and see Russian tourists everywhere and I couldn’t help but wonder about the connection. I also was struck by what Prague looks like outside the tourist zone. If one goes a little deeper into the city it does not look as glamorous or beautiful and it becomes apparent that the daily lives of locals not involved in tourism might not be as easy and elegant as the city appears. Prague is definitely an unbelievable city, but the amount of other tourists there make just taking it all in rather difficult. If we had had more time, I would like to have gone off the beaten track a little more and perhaps taken in a concert or two.

There is something really special about this country. It has magic. Let me know if you ever want to go and need a travel buddy!

2 thoughts on “My Bohemian Rhapsody”

This site uses Akismet to reduce spam. Learn how your comment data is processed.